The K-1 Class went to the Wildlife Park in Gray last week.
Children attended a workshop on Maine endangered species. They were captivated as they learned about what biologists do to learn more about some species, especially the Canadian Lynx. They discovered why some animals are endangered and what can be done to help protect them.

They discovered that at some point there were only four puffins left in Maine and that biologists had to bring some from Canada and protect them. The program was successful as there are now about 5000 puffins on the Maine coast. Among other animals, we talked about turtles, bats and the Peregrine falcon.

After this very instructive workshop, the children went into the park to see the animals. The Grey fox was by far the children’s favorite, and they had fun feeding the bears! What a great day! 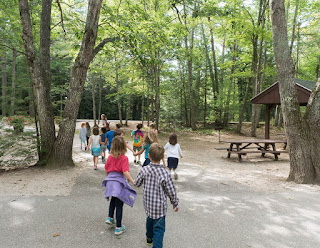